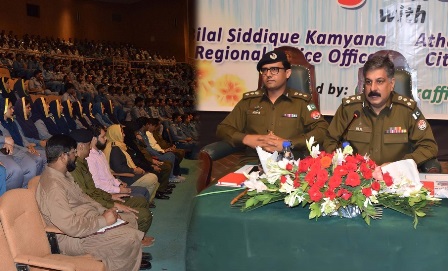 City Traffic Police is a Public Friendly & Service Oriented, new initiated envisioned by the Government of the Punjab and executed by the Punjab Police. Un-precedented growth in two wheelers and four wheeler in the city and growing in capacity of the old Traffic Management System, resulted in conceiving and launching the Traffic Warden System in Faisalabad. The very designation “Traffic Warden” is carefully selected to replace the word “Warden” for the “Police” clearly depicts the intention & objective of the Government and the Punjab Police. The Traffic Wardens are meant to “take care” of the road users, instead of “Police” them. The natural corollary of the main theme is “Courtesy”, “Help” and ensured adherence of general Principles and laid down rules of Traffic.City Traffic Police comprises of approx. 1000 Traffic Wardens freshly recruited and trained. The base line education criteria for these Wardens is graduation. The Punjab Government has created a new Service i.e. “Traffic Wardens Services” which provides the operating and governing rules for the Traffic Wardens. Recently the government has placed the City Traffic Police under the command of Add. Inspector General of Police Traffic Punjab to create a unity of command and for better management. The Traffic wardens are committed to excellence in Traffic Management, highest standards of integrity and courtesy.